In 2005, Adidas finalised its acquisition of peer sportswear brand, Reebok. At the time, Adidas hoped the acquisition would transform the company into a major competitor against Nike, particularly in the US.

Since then, the Adidas brand has closed in on Nike - now worth about half as much as the Nike brand versus less than a third of Nike’s value in 2007.

On the other hand, Reebok’s performance has been flat, and the brand is no longer worth what it was when Adidas first acquired it. Adidas paid just under €3 billion for the Reebok business in 2005, and today there are rumours that a sale could be made for €2 billion or less. Of the €3 billion paid by Adidas, over half resided in the brand. Over the years, Adidas has disclosed the value of the Reebok brand - from first recognising it at €1.7 billion in 2006 following the acquisition, to its latest financial statements which note that the carrying amount now stands at €733 million.

Our analysis over a similar time frame mirrors these results – the first measurement of the Reebok brand value at 1st January 2008 estimated the brand value at €1.8 billion, and our latest valuation at 1st January 2021 estimates the value at €765 million. Our valuations are based on first principles using publicly available financial data. Despite this, our valuations are consistent with those calculated with full access to management information - a testament to the rigour of our annual public brand valuation study.

The drop in Reebok brand value under Adidas ownership has been driven by a competitive market, while Reebok has struggled to find its niche appeal. There have been some major efforts to revamp the Reebok brand over the years. Reeboks Classics, popular in the 1980s, were relaunched a couple of years ago in line with the trend back to “dad trainers”. In an attempt to win over customers via a different niche, Reebok began its sponsorship of CrossFit in 2010.

This niche-seeking, soul-searching activity has been paralleled by various rebrands. Prior to the acquisition, in the late 90s, Reebok dropped the Union Jack from its logo in lieu of the iconic vector logo. Various visual identity updates followed, the most notable being the “delta” logo which was adopted in 2014. This move was reversed shortly thereafter, and the delta was replaced with the late 90s vector logo again in 2019.

Although the Reebok brand has faced some turbulence in the past couple of decades, its history spans all the way back to 1958. With a legacy in sports shoes and a track record in high-profile endorsements, there may be a brighter future ahead for the Reebok brand yet. In the early 2000s, Reebok signed major sports jersey partnerships with the NBA, the NFL, and the NHL. These sponsorships have subsequently been passed to Nike and Adidas, but new ownership and strategic direction of Reebok could bring back some of its former sporting glory.

According to our latest Brand Finance Global Brand Equity Monitor, fans of basketball, American football and ice hockey in the US are all more likely to consider Reebok, Adidas, and Nike than non-fans. But the boost in purchase consideration for Reebok is greater among NBA fans than fans of either the NHL or NFL. This suggests that a steer towards basketball, leveraging Reebok’s heritage in footwear would be the strongest path ahead for Reebok post-separation from Adidas.

Here at Brand Finance, we bridge the gap between marketing and finance. We have multi-disciplinary expertise across finance, brand licensing, market research, and analytics. We help clients to understand, optimize and leverage the value of their brands. 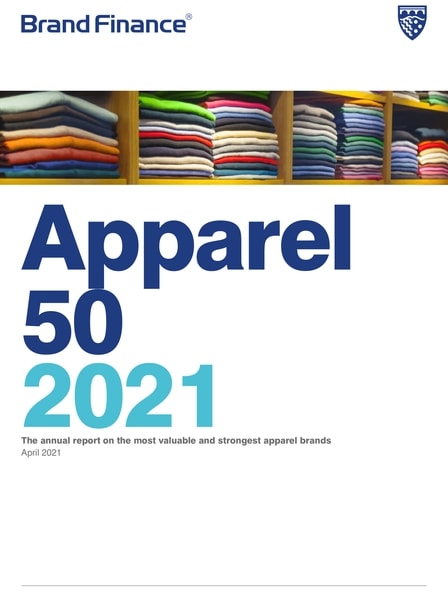 Download the full report to learn more about the world's most valuable and strongest apparel brands.

Annie Brown is an Associate at Brand Finance; she joined the London office as an analyst in 2017. A trainee management accountant, Annie has written a whitepaper examining the veracity of goodwill valuation, led the annual Global Intangible Finance Tracker study, and worked on numerous technical and strategic Brand Valuation projects. Annie specialises in the Oil & Gas and Banking industries and has worked with Shell, Neste, Barclays and TD Bank. Prior to joining Brand Finance, Annie studied Philosophy & Economics at Edinburgh University.